The Shard of Glass 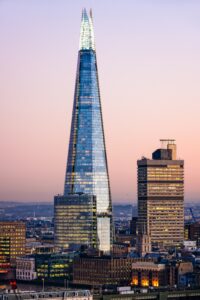 The Shard of Glass is a significant landmark on the London skyline. Completed in 2012, this mixed use iconic structure stands 310 m tall, making it the tallest in the United Kingdom and one of the tallest in Europe, with a total of 87 floors.

The Shard sits on a site that was previously occupied by Southwark Towers, a 24 storey 1970’s office block. The foundations of the Shard sit immediately above and adjacent to one of London’s major transport hubs, London Bridge Station.

In order to determine the performance of both London Underground and Network Rail assets, an extensive monitoring regime was designed and introduced over the period of demolition and construction. Escalators, running tunnels, pedestrian passageways and the ‘vaults’ market hall required monitoring in real-time to evaluate infrastructure behaviour and allow normal operation of the railway network.

A detailed predicted settlement footprint meant that neighbouring building facades, including the world famous Guys Hospital, office blocks and viaduct arches, also required real-time monitoring. In addition, the basement development of the Shard was monitored to determine the structural performance as it was constructed.

All of the data from the various automated instruments and manual surveys was collected and processed, enabling real-time visual representations of any structural movements recorded. A report was generated on a weekly basis and distributed to the client’s team.

The client also had access to the real-time data via Sixense’s Geoscope monitoring software.

Our projects in Europe

Our Monitoring projects
Need to talk with an expert ? Contact us
We use cookies to ensure that we give you the best experience on our website. If you continue to use this site we will assume that you are happy with it.I agreeNo, I refuseMore information